The video battle is on: enter Facebook Watch and IGTV

Mark Zuckerberg has ambitions. Leading the world in social media is not enough. Mark’s got bigger plans. So, move over Murdochs and Packers, there’s a new media mogul in town. Today, I lift the lid on Facebook Watch and Instagram TV, and where Zuckerberg is heading.

You may recall that at the start of the year I attended Social Media Marketing World in San Diego. Thereafter, I shared a snapshot of what marketing leaders the world over believe the future will look like, not only in relation to social media but marketing in general.

Read the future of marketing: it’s time to win friends and influence people, to catch up.

Today, I dive into two of the newest forms of video distribution – Facebook Watch and IGTV – both from the most ambitious player in the social media and now video marketing game, Facebook.

What’s exciting is that when Facebook adds something new, the algorithm is updated to favour content that complies. So, if you use video in your real estate marketing there are opportunities for you to align your ambitions with that of Mark Zuckerberg!

Social media TV is the one to Watch

One of the big talking points from Social Media Marketing World was Facebook Watch. Taking on the likes of Google’s YouTube, Amazon TV, Netflix and Hulu, to name a few. Facebook Watch is part of Facebook’s plan to become the number one website, worldwide, and preeminent video marketing platform. This strategy to achieve growth is focused on forging ahead into the streaming and distribution of long-form video.

In reviews of Facebook Watch content, it’s been said that it’s more YouTube than Netflix and this may be true at this very early point. Others have commented that Watch is still feeling its way. Bear in mind that it was only launched in August of 2017.

In its attempt to play catch up with other online video channels, Facebook is taking a two phase strategy to Facebook Watch;

Tactic one – spend one billion dollars on original Watch shows

Facebook have a huge war chest and they are spending it on Facebook Watch. The Wall Street Journal reported that Facebook is willing to spend up to $1 billion dollars on original content, in 2018 alone.

For example, on the morning of writing this article it was announced that Catherine Zeta Jones was set to star in a 30-minute weekly show called “Beauty Queen”. It is described as a dark comedy, loosely based on America’s number one beauty pageant coach (sounds fabulous) – all completely financed by Facebook.

The advertising revenue split for show producers on Watch is 55% (creators benefit) and the same as YouTube. However, in the wake of some scandals, ad revenue at YouTube has been slowing. Leaving frustrated content creators more vulnerable to the advances of Watch and interestingly, LinkedIn too.

Mark Zuckerberg is set on Facebook becoming a (proper) media company too. As we’ve seen in the past, Facebook is fast and relentless when it comes to shutting down or acquiring new rivals. Facebook Live and Stories are cases in point. When they launched they had an immediate impact on Twitter’s Periscope and Snapchat, slowing user growth and consequently, the share price too. Before Snapchat, there was Instagram – Mark liked that one so much he bought the company. 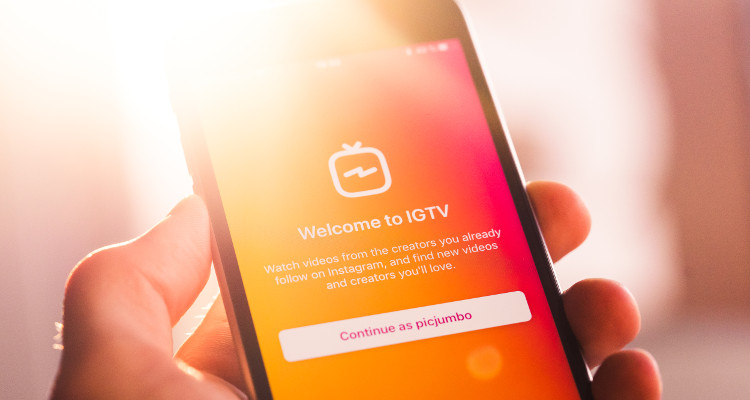 IGTV is the home of vertical video

So, while Watch is not yet available in Australia (at the time of writing), the other newcomer – Instagram TV (IGTV) has arrived. IGTV burst onto the scene with barely any fanfare in late June. I literally woke-up one morning and it was there, at the top of my Insta feed, an icon of an old-fashioned TV.

IGTV opens with a retro looking static screen, an effect that will be lost on anyone born post 1980 – unless they’ve watched Poltergeist.

With Instagram TV, you can only record and publish vertical video. The very format that YouTube struggles to display, yet so many of its youthful creators choose to record in.
IGTV is built for mobile first. This means it is totally focused on content that is viewed on mobile devices. Currently 65% to 75% of video content is viewed on mobile and recorded in a vertical 9:16 ratio.

Hoole.co video coach, Sue Moses, did an experiment to see how the algorithm was rewarding account holders using IGTV. She posted a 2-minute video onto IGTV shortly after its launch. Sue reported, over the next 4 days, even though her (cat and dog) video may not have gone viral on IGTV, her ‘regular’ posts on Instagram definitely saw more traffic.

How real estate can make the most of video marketing

So, what does all this mean to you as a real estate agent, and your real estate marketing plans?

In increasing numbers, people are moving from consuming traditional media – print, old-school TV and radio broadcasting – to video content streamed over online media platforms. So, whether you are making your own real estate video marketing content or advertising inside relevant content created by others, it’s about eyeballs.

For real estate professionals looking for new opportunities in real estate video marketing, Facebook Watch will provide more varied, highly niched opportunities for real estate advertising. Starting out with in-show ads placed inside the content of relevant lifestyle programs. This could be video of your listings, or client testimonials.

On IGTV, that videos can run longer than the previous 60 second restriction, any real estate videos that you’ve posted to Facebook or LinkedIn can now be shared to IGTV. Just be sure to record in vertical mode!

Will real estate networks make their own TV show?

We, at Hoole.co, think it will be interesting to see which of the large franchises or independant real estate networks jump onto Facebook Watch first with their own ‘sponsored’ content. What we do know for sure is that any obvious ‘salesy’ type programs will struggle to be approved for a show on the Facebook Watch platform.

Shows will need to be entertaining and informative and most importantly ‘watchable’. Think along the lines of Selling Homes, or the Grand Designs type programming. Personally, I’d subscribe to a weekly reality show that follows a top agent (or one on the way up). Or maybe one that follows a family on their journey from listing to sold and into their next home.

There’s no denying that video is the flavour of the month or ‘new black’. So, keep producing, or start creating videos to market yourself as a real estate agent.

Make real estate videos with keyword terms that home buyers and sellers are likely use in their searches. Plus post these videos across all platforms (in their native form) to ensure you are being seen everywhere.

“For the bold, create your own weekly real estate Facebook Live show, then post it to LinkedIn, and IGTV.”

If you’ve started to make your own real estate marketing videos and would like some tips on making them look more professional, read our previous article on how to get started with Facebook Live and self recorded videos.

On the other hand, if you’re struggling to get a video strategy sorted, you can reach out to me or our Hoole.co video marketing coach, Sue Moses. We can help you get started.