The secret to speaking on camera

Potential home sellers and property investors are conducting digital interviews on you and your competitors, so make use of video marketing to outshine them all, and get that all-important invite to a listing presentation.

Learn from actor and video coach Peter Mochrie as he discusses why short and professionally shot videos are more impactful, and a better sales tool, than talking into your smartphone. With over 30 years of acting experience on TV shows such as The Restless Years, Water Rats, Shortland Street or Murder Call, there’s no better video coach than Peter Mochrie.

Peter recommends keeping your videos to no more than 90 seconds and making sure those seconds count. Most importantly plan, prepare, and practice – there’s work you do before a listing presentation and video is no different. Make sure you put real thought into the ‘who, what and why’ before speaking on camera.

Following is the video transcript.

The secret to speaking on camera

Today, I’m with Peter Mochrie, who’s an actor, an auctioneer and a teacher.

Peter, give me a bit of a rundown on your background.

I started my acting classes and got onto a TV show called The Restless Years back in 1978. I did a lot of television, then went to Nida and appeared on a show called Water Rats. I was doing a lot of TV shows, a lot of stage shows and there was a couple of films in there too.

One TV show, which took me to New Zealand, was a show called Shortland Street. I was in that show for seven years and that’s where I met my wife and I had a son.

I have always been a teacher, having started with the Nida Open Program back in 1995.

Screen wise I teach people how to talk down the barrel of a camera because public speaking and talking to a camera is the hardest thing known to mankind and many people get nervous.

Excellent. Well Jake who’s behind the camera and me are super excited because this is a little bit of our world that we’re involved in. So, we’re looking forward to all your tips today.

Whenever I work with anybody I go and do a ‘digital interview’.

You have to know what’s going on. This is the 21st century, you know in the old days you put a photo up a little bit of copy.

I think that’s a very good point because I feel like I’ve already met you because we’ve been working together on Digital Live and we’re going to be doing that throughout the year. And when you walked in the door I was like, “Oh hi, Peter!”. So yes, it’s very true that in this day and age you can get to know people and hear their voice, and see their face, so they become very familiar.

Business these days has changed so dramatically, so yes you have to have a website. You’ve got to be on all of those apps and you’ve got to put up something that’s decent because once it’s up there it’s there forever, you know until you bury it. And people will judge you on your latest post or video.

Yep. Actually, I was just reading that on apps like Instagram the younger generations are going back and deleting their content because they don’t want people to ake what they did in the past as a reflection of who they are today.

So yes, that’s a really good point because as you know, I consider myself an oldie and nothing’s really changed in what I look like in the last three or four years. So, I can reuse that content.

So as we’ve been chatting you been looking at the camera and talking ‘to camera’. That’s a skill that you have from your acting background and you train people in the real estate industry to talk on camera. What kind of training do you provide?

I help them to decide what they are going to say.

Most people get in front of a camera and they say right, I’m going to get up there and wing it.

No, you need to plan a beginning, a middle and an end.

To practice, you can grab your iPhone put it in the vanity mirror and have a look at what you’re doing. Are you moving around too much? Do you put your head to the side? Do you stumble over words?

Say you’re a real estate agent. And you say to your videographer, I’ll meet you at the house at 3:00 o’clock. The guy puts his camera on and says to you, “What do you want?”, and you say, “I don’t know?”

The videographer will then say, let’s try a few things. Give me an intro, then we will go inside the property and do some b-roll then we’ll come out and we’ll do an outro.

The videographer shoots the video footage and then when you get it back in a week’s time, you look at the video and think that’s not very good.

Plan, prepare and practice before speaking to camera

Ask yourself. Who are you talking to? What’s your demographic? Have you done any research?

There are lots of tips to help you get going. It’s all about preparation.

It’s like anything, even when you go into a property listing appraisal (before you visit someone’s home) you’ve gone and done a data search and you know exactly what you’re going to talk about before you walk into the property.

You need to do the same thing with a video, you’ve got to do your research. You’ve got to put in some preparation time. Olympic athletes train for four years!

You could do a little voice warm up in the car, this will help you to get connected to who you are. Instead of just being a talking head, know what you’re talking about and come from a good place. It will work because as you just said, Melanie, real estate agents are going to have to delete old videos if they are not good.

A lot of people at the moment think they can use their iPhone. They are not worried about good lighting. Well, you’re not serving anybody and after a while your brand will get cheaper and cheaper and cheaper. You say “I’m not paying any money for my marketing”. Well, we say, “It shows.”

Yes, and it’s a reflection on how you’re going to market your clients’ properties, right? Whether they’re a property investor and it’s a rental or it’s the sale of a home, your clients are going to judge you, right? So I agree with you wholeheartedly.

How much energy do you have to have? You know, what works with your energy. It’s highs and lows when you’re presenting versus when you’re just negotiating or talking to a client in real life.

OK, the best thing in the world is to just have a conversation, just like we are now. You are hopefully seeing that I’m authentic and genuine.

But when you stand in front of a camera, your a adrenal-glands start to secrete, your heart races to 160 over 90. Your thyroid is thumping away and on top of that, most people have a coffee. Then they go …

Most people think that I’m going to talk to 3,000 people and it’s like a shotgun blast and the pellets fly everywhere instead of right down the barrel of the camera with a 303 bullet.

Everything rises when you get in front of a camera. As I said you get nervous so you overcompensate, whereas we’re all at home breathing normally and we’ve got the little mouse or our thumb paused and we’re thinking “No, I don’t like this person.” Click, dial tone.

It’s the same thing with the god box (TV), you know, you’ve got the TV control and can flick past a channel or TV show if you’re not liking it.

With video marketing every second counts

That’s a really good point. Talk to me about how long a video should be and how to capture attention so that people don’t pass by your video. How many seconds do you think we have available to us in order to catch their attention?

In the old days, we used to have three to four minutes, but now it’s 90 seconds or less.

So that’s the length, excellent love that, but what about the beginning?

How do you approach the start of your video? Because there’s a lot of people out there that are doing these long 15-second intros with graphics flashing up everywhere.

What are your thoughts on how you intro yourself and how you make sure that somebody actually wants to listen to you for those for 90 seconds?

Do you remember Coco Chanel?

Coco used to say take one piece of jewellery off before you walk out the door. It’s the same with your intro – less is more.

I know who you are. I’m looking at you, so you don’t need to gild the lily.

Show me what you’ve got, not who you are.

Let’s get to the ‘meat’. Show me that and then at the end just quickly get off-screen. Anything more is too long and what happens is people tune out, so a badly created video actually achieves nothing.

So keep to 90 seconds. Have a beginning, a middle and an end.

Think of it as a cadence of music. Your video should have a beat, a rhythm, that’s in harmony.

There’s no better marketing than a professionally shot video

True. I think just like with real estate, there’s a lot more to selling a home than people think of at face value right? We get so used to seeing videos and seeing content that we think it’s easy, but the reality is that as you said, it takes a lot of preparation.

If you look at television commercials they’re around 30 seconds and in those 30 seconds, the advertiser gives you everything that you need to know to go out and buy their product.

So, if you’re doing way over 90 seconds, I’ve left the building!

If you’ve read this far, leave us a comment to let us know how confident (or not) you feel presenting on camera. Is it something you enjoy or fear?

Better still, share links to brand videos you’ve done (whether self-recorded or professionally shot) and we’ll critic them for you.

About this video series

Hoole.co’s video series brings together the best digital and social media minds in the real estate industry, to share the wonders of the web and magic of mobile. Subscribe to Hoole.co or follow us on social media (below) for free tips and tricks to grow your reputation and attract prospects, digitally. 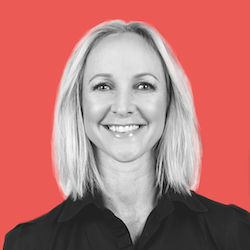 Melanie specialises in helping real estate professionals perfect their personal brand, build a first-class digital profile, and implement inbound marketing activities to attract property owners planning to sell. If you are unsure which direction to take with your digital marketing – contact Melanie Hoole for help.